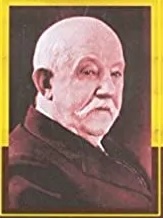 Calvin Knerr was born December 27, 1847 and grew up with a father who was a lay homeopath and an uncle who knew Hering at the Allentown Academy. He attended The Allentown College Institute and graduated from Hahnemann Medical College in 1869 (along with Cowperthwaite and T.L. Bradford).He then entered the office of Dr. Constantine Hering as his assistant. The diary he kept while living in Hering's house became The Life of Hering, published in 1940.From 1873-4 Dr. Knerr studied in Berlin, Vienna, and London. In 1874 he married Melitta Hering, one of Hering's daughters, and resumed his duties as Hering's assistant. In 1878 and 1879 he published 2 editions of his book, Sunstroke and Its Homeopathic Treatment.Dr. Knerr spent 5 years writing his 2-volume Repertory to the Guiding Symptoms, which was published in 1896. This repertory to Hering's materia medica never saw widespread use.Knerr used the same structure throughout as found in the Guiding Symptoms, even to including the "relationships" at the end of the book and giving the remedies the four lines of grading. This makes for a book that is bulky without being that useful in everyday study.As a reference repertory for comparative research it has its own place. Knerr's repertory mixes pathogenic and clinical data but it also contains rubrics that are found nowhere else. Now available on computer, the complexity and difficulty of Knerr's repertory have given way to ease of access through simple search functions.